The saying “there are always more fish in the sea” doesn’t ring true for one of America’s most critically at-risk species. Each year, populations of the endangered Central California Coast coho salmon remain low despite efforts to improve aquatic habitat. Less fish in the water means less fish in the “dating pool” which causes more inbreeding and genetic defects that further threaten populations. Something more needed to be done to help the coho flourish in California, but what?

The redwood forests of California’s North Coast are known for their raw beauty and rich wildlife. But decades of aggressive timber harvesting combined with overfishing, changing timber owners and encroaching development for housing and agriculture left this landscape diminished, with heavy impacts on the watershed and the species that call it home—like coho salmon, a federally and state protected species.

Fish can’t go forth and multiply without healthy watersheds. Within the 74,000 acres of our North Coast Forest Conservation Initiative, we’ve spent years enhancing habitat in the Garcia River watershed through sediment reduction activity such as improving roads and changing timber harvesting methods which have less impact on the landscape. We are also improving in stream habitat by leaving more trees in riparian area and adding large wood for cover, which helps to recruit and restore spawning gravels in our streams. We have created a near natural ecosystem and conditions for easier passage and safer refuge for the fish to spawn. Yet, the numbers of returning adult coho were below the threshold for a viable population to maintain itself over multiple years. There have been so few salmon returning to a stream that they are unable to find a mate. 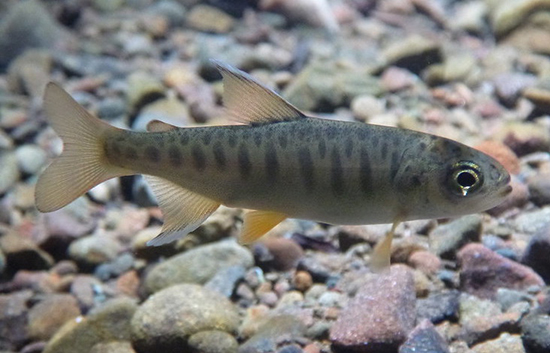 Can you believe that in just 3 years this tiny juvenile coho salmon will grow into a mature fish measuring 19 pounds or more? Photo by Nick Bauer/California Sea Grant.


Looking for another strategy to keep coho salmon populations from becoming locally extinct, we teamed up with the U.S. Army Corps of Engineers, the National Oceanic and Atmospheric Administration (NOAA) Fisheries, California Department of Fish and Wildlife (CDFW), North Coast Regional Water Quality Control Board, The Nature Conservancy, and the Mendocino Redwood Company and co-sponsored a multi-year capture, rearing and release program.

Red the full article from The Conservation Fund HERE.